“Now it’s time to throw away all those Post-it notes and concentrate instead on the SIDO digital information display,” maintains Erik Berg, who is one of the software developers working on SIDO at DataPolarna.

The information displays are placed in key spots, such as control rooms, break rooms and other places where people often spend time or pass by.

SIDO can display procedures to be done daily, weekly or monthly. But it also accommodates checklists that you can go through in case of stoppages to ensure that all necessary actions have been taken before starting up again. SIDO can be linked with terminal displays and vehicles because it is a cloud application that requires only a web browser and Internet connection.

“Examples of tasks that can be handled in SIDO are one-time jobs, stoppages and scheduled operations,” Erik says. “You can enter start times in it and when the task is to be carried out. When it comes to stoppages, they can be repeated either at specified time intervals based on calendar time or another timetable. Scheduled operations are tasks to be repeated at given intervals. A new task is activated when the previous one is finished. Scheduled tasks can be adapted to a work schedule,” Erik adds.

It is also possible to automatically generate data from other systems, such as saw orders from SIBB, and send them to SIDO so that they appear on the digital information display. The same goes for orders that do not have their own order number. They also can be shown on the display.

An important feature in SIDO is called Deviations. It allows you to follow the workflow and determine why everything did not go according to the original plan. Incidents and bugs also can be reported via SIDO to the information display.

Mari Jansson is the other software developer at DataPolarna who works with SIDO. She describes another interesting feature that is important:

“This is a special feature known as leanboard, which is included in SIDO. You can use it to show in real time how many of the total number of tasks that are to be executed during a workday have been carried out. It’s a good way to see where things stand during the workday.”

With SIDO, you first indicate all the different machines you want to monitor, which departments are involved and which personnel are to carry out the tasks. 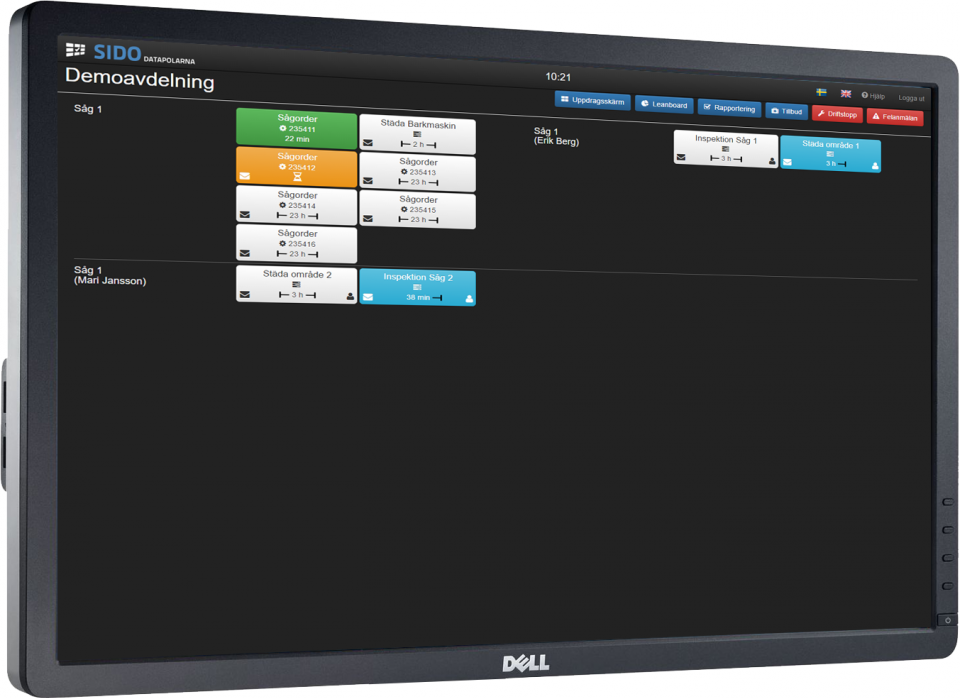