We will be showing our latest product – the moisture meter MoistPal – at Ligna in May. The story behind its development is quite long but interesting – and fairly typical of the way we work at DataPolarna. 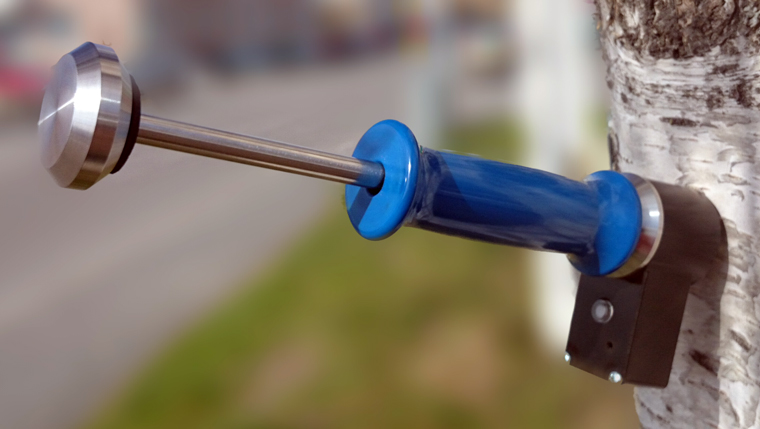 The idea came from a customer

The initiative for MoistPal actually came from one of our customers, Martinsons in Bygdsiljum, south of Skellefteå. They had a requirement for fork-lift truck drivers to be provided with moisture meters and to ‘tap in pins’ to check moisture ratios. The idea was for the meters to be able to signal different moisture ratios with three different colours – red, yellow and green – with a red light indicating a need to check more carefully by ‘tapping in more pins’.

“We took the idea with us, and at Ligna 2011, I visited all the makers of moisture meters to check if there was anything like it on the market or if anyone was interested in producing one,” says Anders Marklund, MD of DataPolarna.

No one had a moisture meter that met these requirements or any idea of how to connect one to a computer. So, we quickly realised that we would have to do it ourselves. The brainwork started almost immediately, but the development work took a big leap forward at the next Ligna fair, when we visited IUC Norrbotten to discuss our project.

“They thought we should contact IUC Västerbotten, as via them we could get access to a so-called innovation check, which could pay for some of the development work. At the same time, a contact in the sawmill industry suggested a company in Skellefteå that was very good at producing prototypes for new product ideas.”

Actegra, as the company is called, were very interested and really liked the idea, and they also managed to produce the prototype within the cost limits of the innovation check. Right after the holiday they started the work to produce a fully working prototype of the moisture meter, and it was ready later in the autumn.

Great interest from people in the industry

At the same time, DataPolarna were working on developing the product so that it could become a cloud service and thereby connect to the web via Bluetooth technology and a mobile app.

“We continued working on our web solution and an app, and at SawTech 2014, we showed our prototype, which immediately created great interest among the people in the industry, which felt great and really inspiring,” explains Anders Marklund.

In parallel, DataPolarna were in regular contact with dryer operators and industry experts, and, above all, had a very useful partnership with Norra Timbers sawmill in Kåge. Their great interest in the product and closeness was a good solution for the work to make the product completely ready.

“It feels great to be part of the development of this new moisture meter. We have now used it for a few weeks and it has worked really well. Above all, it provides much more stable values than those we used before. When we used the old meter, the values fluctuated, sometimes significantly, which meant that we were never really sure if they were right. Now we don’t have that problem and everything is much quicker as we get all the values directly on the computer. It will save us a lot of time in the future,” according to Urban Holm.

The initial series will be tested this spring

Since April this year, we have an initial series that is being tested in a production environment at Norra Timbers Kåge sawmill, Martinsons and in Valåsen. We are now showing it at Ligna, and after the summer, we will go for a full launch.

A further two local companies have been involved in the development work. Techsam in Robertsfors have been responsible for developing the electronic part and Vetab in Skellefteå make the hammer and the hammer heads.

“We have been involved in the development phase of the product together with Anders Marklund at DataPolarna and primarily concentrated on finding suitable materials of high quality so that we end up with a product that is durable and works well. Above all, we have worked on the hammer and the hammer head, which we now believe will be functional for the users.”

Anders Marklund says that the development work has not always run smoothly.

“We have had to abandon quite a few ideas along the way for production engineering reasons, which has delayed the work a bit. We have also sometimes had problems finding subcontractors, including rejecting many different variants of pins that didn’t work very well. We thought we had produced a ready hammer together with SawTech last year, but we had to make some changes to the outer part, with an integrated temperature pin, which none of our competitors has. We also encountered some problems during the industrial trials that we have now solved. The name also took some time.”

Much faster than the others

“The way it works, the time can be halved compared with current meters. This frees up time, and the measurements can be improved and taken twice as often. The documentation will also be much easier as everything can be sent via a cloud service. MoistPal will not require any installation and will be supplied complete with hardware and software in the same package. A subscription is naturally also included,” concludes a satisfied Anders Marklund.